Remember the measles? They’re back!

The current measles outbreak has received major news coverage in the United States because this highly contagious disease – declared eliminated in the U.S. in 2000 after decades of childhood vaccine efforts – has begun to spread again.

Measles is an acute viral respiratory illness characterized by fever, cough, nasal congestion and conjunctivitis followed by a rash. The rash usually appears approximately 14 days after a person is exposed and spreads from the head to the trunk and then to the lower extremities, although some immune-compromised people do not develop the rash.  The incubation period ranges from 7 to 21 days and patients are considered to be contagious from 4 days before to 4 days after the rash appears.  Accordingly, it is recommended that infected people be isolated for four days after they develop a rash.

Measles can be a serious disease for people of all ages, especially those with other underlying medical conditions. Common complications include bacterial middle-ear infection and pneumonia.

There is no specific antiviral therapy for measles, so the medical care provided is supportive and to help relieve symptoms and address possible complications.

How is it spread?

The measles virus lives in the nose and throat mucus of an affected person and it is transmitted to others by direct contact with infectious droplets or by airborne spread when an infected person breathes, coughs or sneezes.  This virus can remain infectious for up to two hours on a surface or in the air after the infected person leaves an area.

Although it is not certain how this year’s multi-state outbreak began, it is assumed that an infected person traveling from outside the U.S. visited the Disneyland theme parks in Orange County, California and spread the disease to others.

The Centers for Disease Control (CDC) estimates there are about 20 million cases of measles worldwide each year, and in 2013 almost 145,700 people died from the highly infectious disease. 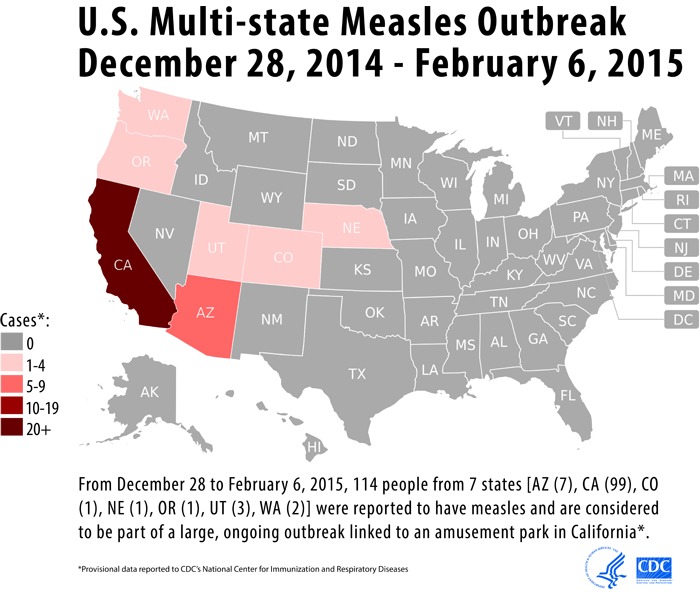 Is measles compensable under workers’ compensation?

While measles is a public health issue, this disease will not generally be viewed as compensable under workers’ compensation because the exact exposure would be very difficult to pinpoint to the workplace. In fact, most employees are at no greater risk of being exposed to measles at work than they would be out and about in the general population.

Other risks and some things employers can do

Risk managers and safety professionals must consider other risks to their organizations due to a measles outbreak and develop the appropriate responses in advance.

Organizations at high risk to be impacted by a measles outbreak include healthcare facilities, first responders, schools, public transportation and those with personnel who travel to areas of the world that have an active outbreak of measles.

Healthcare professionals are on the frontlines of disease management and it is important that regardless of presumptive immunity status, respiratory protection consistent with airborne infection control precautions is used.

Finally, the following lessons learned as healthcare providers prepared for Ebola have relevance for measles:

Click here for additional information posted by the CDC on measles.