Rachel’s story: A portrait of opioid use disorder

Rachel enjoyed gardening and canning vegetables. She enjoyed cooking, taking walks and spending time with her grandchildren. After she was injured at work, she was optimistic about making a speedy recovery. She was 53 years old and had always stayed active and healthy. But pain persisted with physical therapy so her primary care doctor prescribed cyclobenzaprine, a muscle relaxant, along with tramadol, an opioid for pain. Diagnostic tests occurred and surgery followed.

Then, Rachel’s neurosurgeon prescribed hydrocodone/APAP 5-500 mg, another opioid, twice daily. A drug reassessment was not done and, with now two prescribers, she was taking more than one opioid. Years passed with persisting pain and another prescriber added to the mix without drug reassessment across prescribers. Rachel was now on a pain regimen that included multiple opioid pain relievers, including Fentanyl patches for chronic pain.

Rachel’s morphine equivalent dose was 225 mg per day. Guidelines recommend that dosing not exceed 50 to 90 mg of morphine equivalents per day. According to the Centers for Disease Control and Prevention (CDC), someone like Rachel with a drug regimen over 100 morphine equivalents per day faces more than nine times the risk for overdose compared to patients taking 20 mg or less of morphine (or an equivalent) per day. Moreover, Rachel's daily pill burden increased her risk of overdose because she sometimes forgot the number and combination of pills she was taking from day to day. Also, her sense of pain was sometimes so severe that she would take more than the prescribed number of opioids.

Rachel’s garden was now overgrown from lack of care and her grandchildren had become alienated by her despondency. She was suffering from a condition that nobody had ever told her about. She had opioid use disorder. Opioid use disorder (OUD) is a typically chronic, relapsing illness in which patients misuse prescribed, diverted or illicitly obtained opioid medications. Unfortunately, Rachel’s condition was not unique. In 2016, the CDC says that 26% of patients within the U.S. health system who had been prescribed opioids for more than 90 days met the criteria for OUD. 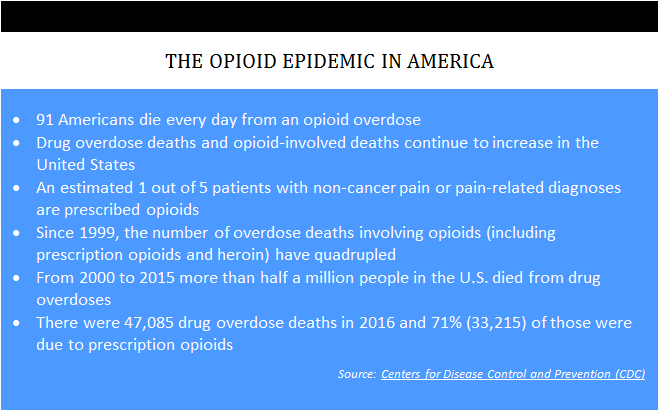 In our next blog, I will tell the rest of Rachel’s story and share steps that can be enacted to prevent unnecessary suffering and death.